The otherworldly experience that is a Ghost show disembarked in Atlanta, and placed a wickedly grim musical spell over the thousands on hand. The wonderfully chic Coca-Cola Roxy venue played host, a gargantuan and vociferous pack of Atlantans played guests, and Ghost played the theatrics that made this whole night worthwhile. Long story short, Ghost came, Ghost saw, Ghost conquered. The local crowd was treated to a doom-metal extravaganza that it will not soon forget.

Led by gloomily kooky front-man, Cardinal Copia A.K.A. Papa Emeritus, a Ghost throwdown is not quite what the average musical aficionado thinks of when you say, “metal concert.” No, a Ghost spectacle is much more — sure, the music is what brings in the masses; nonetheless, the atmosphere is substantially extra. There is a Broadway-like flair to a Ghost setting. The Swedish rockers operate behind a spooky facade of uniforms, masks, and ominous make-up. Rock Lords with a heretical agenda to entice the masses to worship at their feet.

Having recently released their critically acclaimed fourth record, Prequelle, the chaps of Ghost amuse to no end — or, at least for the entirety of their pageantry. With Cardinal Copia at the helm and his nameless ghouls — armed with instruments and bottomless talents — lurking in the background, the night was a go. Colorfully dim lighting resonates throughout the evening, fanatics ready for the thrilling roller-coaster of tunes, the boys unleash their unholy best, and pandemonium overtook the space within the Roxy walls.

Unlike most touring headliners, Ghost does not carry openers. No, the A Pale Tour Named Death trek is a one-band, 3-hour, 2-part, demonstration-of-blasphemous-cool act. An array of highlights overtake the ritual set forth by Ghost, like the Papa Nihil eye-popping saxophone mastery cameo, a radiant collection of Cardinal Copia garments, the ungodly rain of confetti peppered down onto Ghost devotees during a “Mummy Dust” perfromace, a ghoulishly dope keytar solo, and, of course, the general badassery that Ghost is know for. All said and done, Ghost is simply amazing, visually and musically complex, and ridiculously astounding on that stage. Ultimately, onlookers were served over 25 tracks, a world-class devilish symphony, and an endless supply of sacrilegious jubilation — for that ride home. 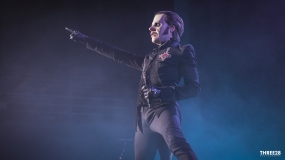