Hotlanta homegrown hip-hop hero Big Boi has always been one with a tendency for the odd and the flashy. Naturally, Boi being Boi, ending out his Daddy Fat Saxxx Tour at his sweltering hot stomping grounds would surely play out as an evening as cool as a polar bear’s toenail. Long story short, mission accomplished!

Artists making a late entrance seems rather commonplace nowadays, too played-out. So, Mr. Antwan Patton upped the ante by not only arriving fashionably tardy at ten (originally scheduled for a quarter to ten), but also in the company of an eye-opening furry little buddy, his owl. Sharing the deck with this twosome were a bevy of musicians that included trumpeters, backup singers, a DJ, and fellow Georgia colleague Sleepy Brown. With the evening planned and a sold-out crowd on hand, this Big Boi-led dirty south shindig was ready to guide all involved onto a nostalgic road of Outkast classics and some of Boi’s acclaimed solo material.

The pageantry carries itself as outlined. Hip-Hop banger after hip-hop banger is the name of the game, and no one plays the theme better that Boi and his on-stage comrade, Brown. Onlookers chanting along to every thumper, beers guzzled by the ton, and chants of A-T-L just oomph-up the environment to newer and bigger heights by the minute. Then, as the night hinted at its apotheosis, a grand surprise! The one, the only, Mr. Killer Mike cameos in on the ceremonies. It was Georgia’s finest on one stage, and it made for deafening jubilation and a genuine display of what real hip-hop looks like. So, Atlanta, the only question remaining is, were you not entertained? While, sadly, Big Boi’s Daddy Fat Saxxx Tour has come to its close, this run of shows provided zero doubt that this rap icon is still in tip-top form. From his coordinated dais strolls, to his flair for mixing bombshell guest appearances, and, of course, those fire rhymes that blow minds, this Peach State phenom is undeniably a wicked force of hip-hop royalty and one heck of a performer. Cheers! 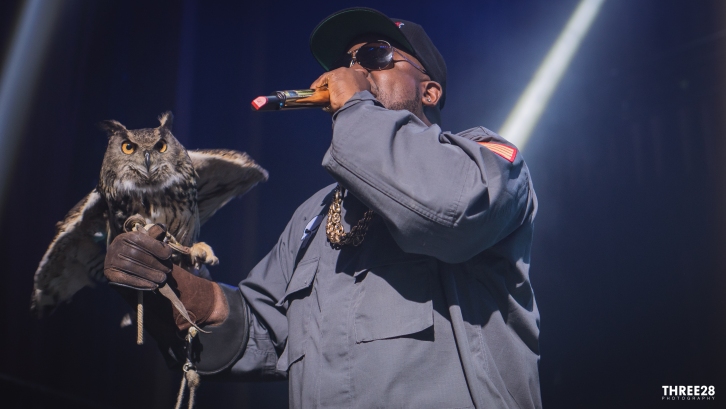