Goodbyes are never easy. Heck, just about every final farewell occurrence is that of a sentimental nature; not in Slayer‘s world though — they do it a little different. Trekking into Atlanta for one last career-closing shindig, these thrash metal legends gave their A-Town faithful one fucking masterful concluding hurrah. Pulling out all the bells and whistles, Tom Arraya, Kerry King, Paul Bostaph, and Gary Holt laid down a cacophonous frenzy that burst quite a few ear-drums, melodically cracked a few skulls, incited plenty of mosh-pit tantrums, and prompted dozens of crowd-surfing flashes — this was, after all, a monumental metal spectacle.

There is very little to say about Slayer that has not been previously stated. These SoCal juggernauts helped define the very genre to which they cater. Known as one of the “Big 4,” Slayer built a decades-spanning career through a pedal-to-the-metal approach that gained notoriety way back in the early ’80s. Lyrically broaching on heavy-set topics like human torture, Satanism, serial killers, and Nazism has earned Slayer a reputation as curious cats of dark topics, and ruffled a few feathers along the way. Nonetheless, after roughly 37 successful years in the biz, the time to call it quits came full circle.

Alas, here we are, last ever Slayer throwdown in Atlanta. The gang showed up in full-throttle mode and ready to impress. Under a massive backdrop of the bloody-eyed Jesus artwork from the outfit’s latest album, Repentless, the fellas delve into their masterfully iconic shtick. Hard pounding and ground shaking notes explode off those instruments under a bevy of flames and strobes. A fully engaged sold-out crowd push the energy to newer levels by the minute. All hell has broken loose — and that’s a fucking thing of beauty in this scenario.

For roughly 90 minutes and across 19 flawlessly performed tracks, the Slayer bunch navigate through the highest of highs from their storied discography. From evening opening banger “Repentless” to a Heineken logo inspired tribute to fallen member Jeff Hanneman during closer “Angel Of Death,” the Slayer Gods, well, slayed. High caliber professional they are, the Tom Araya-led foursome bid adieu to Atlanta with two simple words: ‘Thank You.’

As for the fans, the night was bittersweet, rightfully so. Slayer has always been more than just music. Slayer is an inspiration, Slayer is an identity. The boys may have moved on from the live setting, but their tunes will keep heads banging for generations to come. And that’s quite a fucking legacy. Cheers! 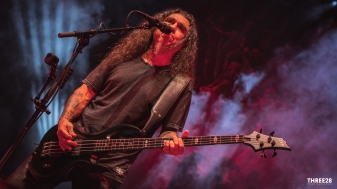