It’s easy to get sucked into the idea of Calpurnia. A teen-filled alt-rock quartet out of Vancouver, led by Stranger Things star Finn Wolfhard. What could possibly go wrong? The fame element alone this youngster carries might lure record companies into opening their checkbooks, without even giving the gang’s sound a listen. However; if you look a little deeper and listen a little harder, one can find 4 teenagers that know exactly what they are doing. Calpurnia is not just a passing trend for Finn Wolfhard. Calpurnia is the byproduct of four equally talented adolescents with some serious tunage.

It’s a packed house, through and through, at Atlanta’s Terminal West. Moments leading up to Calpurnia taking the stage, it’s sheer pandemonium. Cameo support appearances from Wolfhard’s Stranger Things’ costars Caleb McLaughlin and Gaten Matarazzo send onlookers into a frenzied state of mind. Rightfully so! How often does one get to see three actors from the popular Netflix sci-fi drama packed inside a mid-sized concert venue? Not often would be our guess.

Melodically, Calpurnia has an Indie-Rock/Hard-Pop element going for them. One might even detect certain Americana-esque hints in there. Alas, Ayla Tesler-Mabe, Jack Anderson, Malcolm Craig, and Finn step foot in front of their sold-out fan-base and the rest was history. Musically, this baby-faced foursome have some serious chops. Don’t let their age fool you, this tetrad is serious about their craft. Though the performance fits within an hour’s time, mainly because of the gang’s limited discography, the pageantry is performed in an efficient manner.

Anderson and Craig mainly play it coy on bass and drums, respectively. By this we mean that they address their aficionados the least, but, their skills both talk the talk and walk the walk. By contrast, Wolfhard is a junior rock-star in the making. His high jumps, shaggy locks, guitar shreds, and vocal-work paint a bright future. Lastly, there’s lead-guitarist and co-vocalist Ayla Tesler-Mabe and her harmonious delivery. The girl is a force to be reckoned with. While Finn is the big name on the bill, it’s Tesler-Mabe that goes around stealing the spotlight and winning folks over with her charm and, of course, her string mastery. 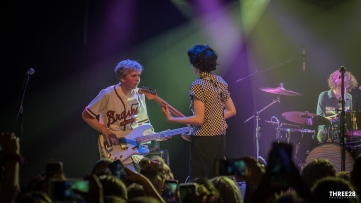 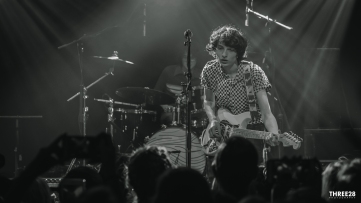 All the same, if Calpurnia wants to mold a lasting career in the music industry, there’s a long road of growth ahead. The kids are young and the tunes are just a handful, but, if these 4 can keep pace with their strong start and fulfill their promise, the sky is the limit. Calpurnia has been able to catch our attention, now it is just a matter of holding on to it. We trust they can.

Be sure to download Calpurnia’s debut EP Scout, which features singles “City Boy” and “Louie,” out June 15 on Royal Mountain Records.