Article and Photos by Andres Alvarado

Aussie quintet POND brought their mesmerizing pageantry to Atlanta’s The Loft. This psychedelic-pop gang from down-under has been widely recognized for their a cosmically soothing approach, fan-interacted showings, and an oft revolving line-up involving fellow countrymen and genre titans, Tame Impala. This go-round, the Nick Allbrook-led troupe performed for a packed venue of aficionados ready to be handheld onto a downpour of starry psych-rock tunage.

Front and center stands Allbrook, a slender and pint-sized man, in an Outkast tribute tee as POND performs in the hip-hop duo’s hometown. Shaggy bed-hair and glitter splattered around his persona make Allbrook seem all the more rock-n-roll – if that makes any sense. Backing the POND vocalist are a highly rhythmic foursome, Tame Impala’s multi-instrumentalist Jay Watson, Shiny Joe Ryan on the bass, Jamie Terry in his Taylor Swift-inspired tee on the keys, and drummer James Ireland.

Playing to a boisterous and fully engaged mob, the Perth-based five-some delivered a bevy of highlights. Allbrook consistently panders to his base by way of crowd-surfs, fist-pumps, and signature oddball dances and facial expressions. While Nick’s vocal works is the driving force behind each anthem, his antics are what really bring the band’s tunes to life. The remaining POND mates all take a back-seat to their front-man, and for the most part stand their ground on the dais, but do not let that fool you. The galactic-rock sound-waves produced by the background foursome are enticing and dreamy. While Allbrook may garner most of the ohhs and ahhs, it’s Watson, Ryan, Terry, and Ireland that keep you swaying and dancing throughout the evening.

Overall, the band is a hoot to witness. With a storied discography that travels back roughly a decade, POND tossed out plenty of oldies, and mixed in some off their new highly acclaimed LP, The Weather. This Australian gang serviced onlookers with abundant space-inspired hooks, wild and weird lead-singer antics, and just a let-loose dosage of good old-fashioned fun. POND is, most definitely, one act to catch on the live circuit.

For more on POND and their ongoing trek, including a stop at world-famous music festival Bonnaroo, click here. 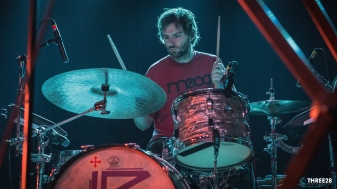 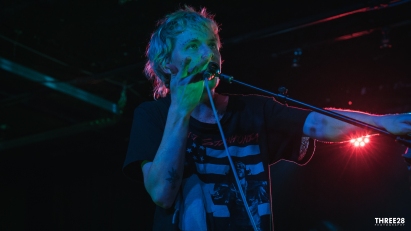