Somewhere in the pantheon of classic rock gods, the boys of Poison hang-out. Founded way back when in 1983, Bret Michaels and his comrades have sold over 45 million records and performed to sold-out arenas all around the world non-stop. For 2018, they teamed up with illustrious veterans Cheap Trick and hard-rock outfit Pop Evil for the  Nothing But A Good Time Tour. Journeying into Alpharetta’s Verizon Amphitheatre to a jam-packed atmosphere was just another night in the life of Michaels & company, but to their faithful, this was an evening that produced countless memories and a bottomless batch of the nostalgic feels.

While the opening acts did their thing, and did it handsomely, Poison was the reason the venue walls were flooded side to side and front to back. Stepping onto a humongous stage at roughly a quarter past nine, the deafening cheers unquestionably made this Pennsylvania foursome glad to be in Georgia. Front-man Bret Michaels, decked in a Poison sleeveless tee and red bandana, is a joy to gaze at. He is a bona fide showman and a legitimate otherworldly presence. Lead guitarist C.C. DeVille is rock idiosyncrasies in the shape of man, and one hell of a shredder. Drummer Rikki Rocket may lay in the background, but his wide smile and hi-hats mastery rings loud in the foreground. Then there’s bassist Bobby Dall and his visually simplistic approach of jeans and a flannel, but man, does he send thumping rumbles with the best of them. 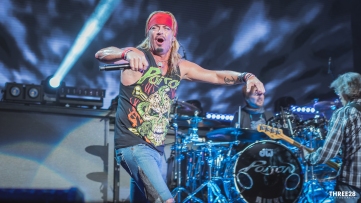 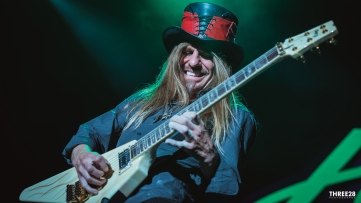 As for the overall atmosphere, it’s exactly what you would expect from a storied band with an endless budget. Powerful strobe lights shining bright, a cat-walk to gallivant their way to those lucky front row fanatics, smoke cannons, visuals like no other, Bret Michaels’ legendary America-themed cowboy hat, and, of course, the show-tunes and antics of one the most iconic musical troupes the goddamn U.S. of A. has ever produced.

Yes, these dudes will entertain you to no end, well, maybe until the show concludes – but you get the gist. The pageantry includes individual solos from DeVille, from Dall, and from Rocket. Also, a trip through Poison’s storied discography from evening opener and 1986 anthem “Look What The Cat Dragged In” to a closing cover of KISS‘ “Rock and Roll All Nite.” In the end, Poison is a bucket-list add-on for anyone that’s yet to witness their grandiose stylings, and a do-over for any diehard that relishes in the good times. We won’t tell you that Poison puts on the greatest show on Earth, but if you believe that, we won’t argue with you either. Cheers! 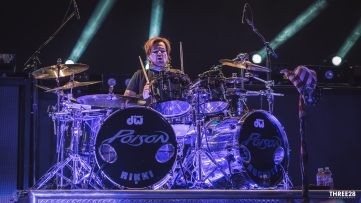