Oakland hyphy super-star G-Eazy conquered his Atlanta fan-base with a whirlwind of live music awesomeness. Performing before tens of thousands of aficionados, Eazy brought with him a sleeve full of aces that left ear-to-ear smiles on his A-town faithful. Under the moniker of Endless Summer Tour, Mr. Gerald Gillum also brought along his pal, Lil’ Uzi Vert, to provide Atlantans with a dose of high energy showmanship.

While the opening acts provided tons of fun and banging anthems, the night was leading up to the main act, G-Eazy. At roughly thirty minutes past nine, Gillum enters center stage under a heavy cloud of fog and dim lights. “Let’s get this going, Atlanta,” exclaims Eazy; as the heavy cheering from enthused onlookers deafen the atmosphere. Decked in a yellow Elton John tee and sporting a platinum blonde hairdo, Eazy wastes no time in getting the crowd riled up and pumped. The ceremonies are led off by single “Pray For Me” in grand fashion and stupefying visuals. A space adorned of 3 tall graphic-riddled walls makes the night pretty on the eyes, and Eazy makes the night pretty on the ears.

Masterfully dominating the dias far and wide, Eazy navigates front to back in the name of entertainment. Rifling off banger after banger, Gerald is a dynamo of energy and quite a show-runner. A night packed of highlights unravels before the masses; as Eazy delves into his hits, and takes the time to cover Post Malone‘s “Same Bitches” and P-Lo‘s “Put Me On Somethin’.” Nonetheless, the pageantry’s apotheosis comes in the form of synth-pop starlet and G-Eazy better half, Halsey, joining her beau on stage for their smash hit duet, “Him &I.”

All said and done, G-Eazy is a pop-rap virtuoso. The man commands the undivided attention of his mob and runs one heck of a spectacle. If sublime lighting, bitchin’ graphics, and killer tunes sounds like your idea of a good time, then G-Eazy’s Endless Summer Tour is just what the doctor ordered. G-Eazy is not only a star, but his beautiful thumping gala of fun is worth every damned penny. Cheers! 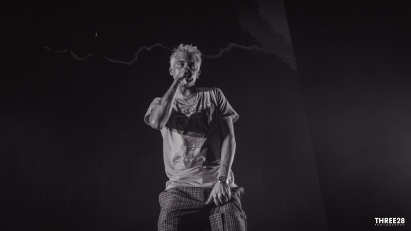