A South American musical takeover boogied into Atlanta as Colombian rock ensemble, Aterciopelados, and Venezuelan jazz funk posse, Los Amigos Invisibles, took over famed midtown venue: Center Stage. With over a combined 50 years of harmonious excellence and 19 albums, these two juggernauts of the Latin scene handed onlookers plenty of tunes, countless moves, a myriad of smiles and a handful of sing-along snippets. Long story short, it was quite the fiesta.

Kicking off this double feature were Los Amigos Invisibles and their tip-tap hip-swaying bonanza. Led by leopard-print cardigan wearing, Julio Briceño, these Venezuelan jam band virtuosos waste no time in setting a party mood. Los Amigos Invisibles are a cut loose type of bunch, a conglomerate of talent, smile-inducing showmen, and elating musicianship. Mastering an array of instruments that range from hand drums and maracas, to the classic guitar, drums, bass and the güiro, these groovy cats were far and wide simply a joy. Performing their famous hits like “Ponerte en Cuatro” and “El Disco Anal,” to a Juan Gabirel cover of  “Hasta Que Te Conoci” and an Andrea Echeverri cameo feature on “La Que Me Gusta,” the lads of Los Amigos Invisibles were pure gold on this night.

With high stakes of matching Los Amigos Invisibles’ performance in play, Colombian rockers Aterciopelados grabbed a hold of the show’s reins. Led by the ever flamboyant Andrea Echeverri, this posse from Bogotá offer up eccentric vibes and tunefully woke social messages. On stage their energy does not quite match up to the one their predecessors laid out; however, it mattered slim to none, as Aterciopelados are not type of outfit. Despite their more relaxing tempo, Aterciopelados did manage to bring the house down with popular hits like “Baracunatana” and “Florecita Rockera.” Nonetheless, the gang’s strength nestled in the ace up their collective sleeve by way of crowd participation in the form of countless sing-along moments to the more easy listening numbers like “El Album,” “Boléro Falaz,” and a Juan Gabriel tribute of “He Venido A Pedirte Perdón.” Overall, what Aterciopelados lacked in zest and vigor was balanced out by beautifully vocalized harmony and inclusive warmth — as the crowd played the part of additional band member.

Music, in general, is wonderfully diverse, worldly, heartfelt, and uniting. In this Southeast U.S. city known for their trap and rock landscapes, it was a wonderful sight to witness the embrace for these Latin artists and their varied brands of harmony. Aterciopelados brought their oddball rock best, and Los Amigos Invisibles simply delighted with their dance disco approach; yet both styles were equally welcomed and cuddled by the Hotlanta crowd. The night was colored of Latin rock hues, and on this evening, that was just perfect. 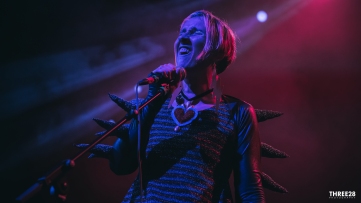