The pantheon of rock-n-roll icons is not that extensive. Think about it. From thousands and thousands of performers and across many decades, the list of worldwide legitimate slam-dunk first-rate rock-stars is incredibly slim. You have John Lennon, Jimmy Page, Eric Clapton, Jimi Hendrix, and a handful others on that level. Among those cemented idols we find legendary guitarist Slash and his unique brand. Naturally, as it was announced that this Rock God was stopping by Atlanta’s groovy Tabernacle stage with his pals Myles Kennedy and The Conspirators, tickets sold like hot cakes. Playing to a completely packed venue, the star of the shaggy mop of hair, aviators and that classic top hat, had fans lining up early and feeling eager to obtain a better view. Expectations were sky-high and the pre-show adrenaline had the audience hyped beyond words. Long story short, once the gang took to the platform, it was sheer excellence. Insanely fun. Mesmerizing.

The countdown to the extravaganza was intoxicating. Then, at five minutes to nine in the evening, it all went dark. An electrifying sensation took over as the lights dimmed to signal the entrance of Slash and friends. The legendary guitarist walked in with a red Gibson Les Paul in hand. Insanity ensued. Deafening cheers spread wide as the entire band made its way to their assigned posts. Slash riffs in “The Call Of The Wild” to get things started. Myles Kennedy and his mates followed suit — and berserk times came to life.

A concert can only be as good as the enjoyment level of the masses on hand. That being said, this pageantry rifled off highlight after highlight nonstop. Not a quiet person in the house, not a bored soul. Bottomless energy by the tons. Myles Kennedy is a master show-runner and a formidable lead singer. At times, the crowd may have lost sight of Kennedy (as their eyes gawked without pause at Slash); nonetheless, the Alter Bridge leader seemed unfazed by the sporadic attention. He simply carried on with bounds of charisma and a cool-cat type of demeanor.

Joining Kennedy in his quest to put on an unforgettable experience, The Conspirators, are a dynamic bunch. String maestros Todd Kerns and Frank Sidoris, along with replacement drummer Shane Gaalaas, are all top notch in their respective instruments. The trio may have less name recognition than the two juggernauts playing besides them; however, you do not get to share a stage with Myles Kennedy and Slash without some serious chops — and that they possess plenty of.

Of course, the main attraction is Mr. Saul Hudson A.K.A. Slash. Historically, with a guitar in his hands, the British-American musician is one bad man — in a good way. When he shreds, Slash appears effortless and in complete control. A crowd-pleaser willing to check his ego at the door and get down-and-dirty for the sake of show intimacy. Not shy to get close to his fans in the front rows, or strike one of those quintessential Slash rock-star poses at any given moment. Slash, the Rock God, is a man of his people.

Overall, the rock-n-roll spectacle was spellbinding. It felt sublime and inclusive. Slash was sensational. Myles Kennedy was phenomenal. The Conspirators were badass. This was a celebration of real rock music and a night soon not to be forgotten. 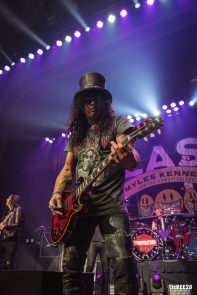 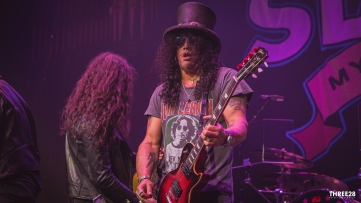