Atlanta was spoiled rotten as one of England’s most famous metal bands, Bring Me The Horizon, made a concert stop at the chic Coca-Cola Roxy. Like many Horizon events, this was a sold-out affair and brimming of hype and fanfare leading up to the very moment of the encounter. As such, fans lined up hours prior to doors; in hopes of landing a spot in the front aisles and up close to these metal icons.

At roughly ten minutes past nine o’clock, the lads of Bring Me The Horizon stand in front of their aficionados, ready to party, ready to melt some faces. A catwalk is set up for the evening and Mr. Oliver Sykes walks the path under some gloomy house illumination, over a sea of cheers, and onto the flashing lights of handheld fan cellphones. A sudden bang is heard; purple streamers fusillade out of canons and heighten the theatrics. Oh yes, the night is about to get lit. Oh yes, Bring Me The Horizon brought their A-game to A-town.

Mind you, the entire gang of BMTH can rile up the masses and cause a ruckus; nonetheless, make no mistake, this is an Oliver Sykes extravaganza. The Sheffield front man is a dynamo of bursting energy, and just loaded with charisma. Decked in black coveralls plastered of art and lyrics, the lead vocalist is an expert in showmanship and not too shabby a singer. Bottom line, Oli Sykes performs as a bottomless pit of liveliness and metalcore punch.

As for the remaining members of Horizon, they all fulfill the duties handsomely and with pinpoint precision. Both Lee Malia and John Jones – filling in for an ill Matt Kean — carry string duties like utter champs. Yin and yang to a T. Meanwhile, drummer Matt Nicholls is no slouch when adding the insane oomph to amp the atmosphere. Additionally, unsung hero and keyboardist, Jordan Fish, adds the sublime deets to make Bring Me The Horizon’s music go from cool to sublime. Basically speaking, this quintet from the other side of the pond are worth their hype and fame. Together, the perform like a well-oiled machine of musical badassery.

While the current tour is correlated to the band’s release of their sixth studio LP, Amo, the ceremonies carried content not only from Bring Me The Horizon’s newest record, but also previous offerings, That’s the Spirit, and Sempiternal. All said and done, it was a rowdy and joyous evening. The Bring Me The Horizon gang is well-versed in the languages of stagecraft and musicality. For roughly 90 minutes and across 16 bangers, the Coca-Cola Roxy crowd was treated to an elite level of pedal-to-the-metal rock — that it will soon not forget. Oh yes, the night was lit. Oh yes, Bring Me The Horizon brought their A-game to A-town. Oliver Sykes of Bring Me The Horizon 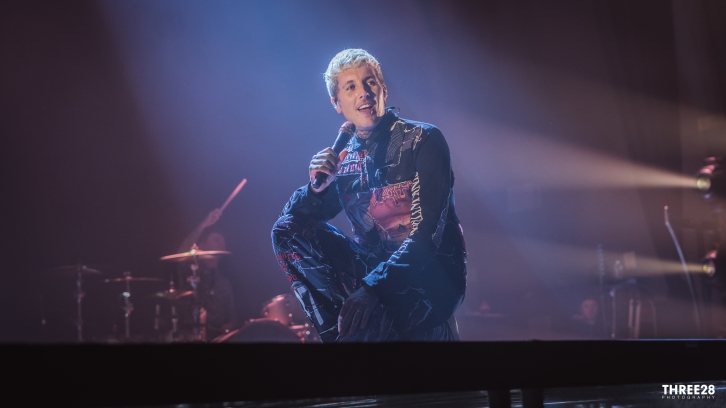