After a roughly 4-year absence from the Athens venue circuit, Young the Giant trekked into town to promote their recently released fourth studio album, Mirror Master. The highly anticipated showing kicks off beneath a sea of cheers — as the California five-piece walk onto the deck. Through smiles and waves, members of Young the Giant acknowledge the enthusiastic onlookers. Under red and orange strobes it all starts. Single “Oblivion” — off the aforementioned new LP — initiates the festivities. The atmosphere quickly turns electrifying and symbiotic between performer and audience.

On stage, Gadhia is solely in control. No doubt the entire gang bring their individually special talents to the table, but make no mistake, Sameer Gadhia is the driving force here. The man is funky fresh and brimming of talent; both vocally and performance-wise. Decked in dark and playful attire, the Californian front-man has moves like Jagger and works start-to-finish to create lasting memories; and enhance said moments as the ceremony progresses.

For their part, the remaining lads of Young the Giant mostly remain in their assigned stage slots. Nonetheless, their lack of rock-star idiosyncrasies are overlooked and pardoned as a consequence of the collective dominance implemented from their instrument mastery. Jacob Tilley, Eric Cannata, and Payam Doostzadeh are all czars of their strings craft — and perform with pinpoint precision. In the far background, drummer François Comtois is a wizard of the hi-hats and tom-toms. Sitting pretty on a neon-lit elevated miniature platform, Comtois delivers the added oomph behind each passing banger.

All said and done, the night played out as a exceedingly lit affair. Mesmerizing technicolor illumination, infectious cowbells, eye-pooping moon-walks, and, of course, wicked tunes all come together during Young the Giant’s wild and emotional spectacle. Gadhia and company are a band’s band and have a seemingly straightforward goal: Give the fans an unforgettable ride. Oh yes, Young the Giant came to Athens, saw, and conquered. In a word, brilliant. 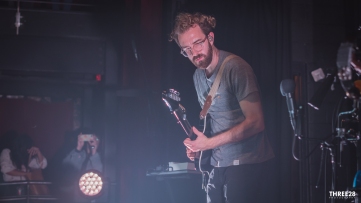